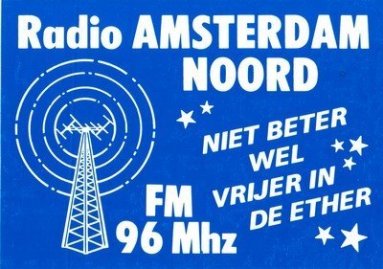 with a tiny channel from a bedroom in Amsterdam Noord

it all started as a hobby of Peter de Platenvreter (then 16 years old)
he thought that R.A.N. (RADIO AMSTERDAM NOORD) was a nice name
the broadcasts could be listened to every Sunday afternoon
and because there was nothing at all in Amsterdam Noord in this area, the R.A.N. grow slowly
some DJs started playing and became more and more known among the people of Noord
Other (Radio) Pirates later also quickly realized that, so the power of the channels was constantly increasing
more up also we were going to broadcast in STEREO (as the first Pirate) and was the R.A.N. now throughout
whole Amsterdam and received more and more listening friends (young and old)
in 1977 the broadcasts were temporarily stopped because the owner Peter was called
for his home country (conscription) it remained silent with R.A.N. until 1982

Chris Duis (Technology) approached Peter with the request for the R.A.N. to restart
the R.A.N. went again with low power emitting irradiate on the cable antennas
(breaking in via WDR a German channel that did not broadcast on Sunday afternoon)

that became a resounding success, we were very well listened to almost immediately
but there too the government put an end to that, so it was not allowed
we have then in consultation with the director of the cable company KTA
decided to go back into free ether with a lot of power and a big mast and Peter
had decided to make the R.A.N. a commercial weekend station this was a hit

rose a resounding success we continued to grow and eventually switched to 24/7 and were then
listen to almost all over the Netherlands our popularity did not go unnoticed in The Hague
together with three other major radio stations, the R.A.N. silenced with a great deal of power and violence
Amsterdam was (as an exemplary City) completely cleaned in one night with regard to Radio stations and it became STIL on the FM

We were one of the larger ones until 23 November 1987
Pirate (Free Radio) stations from the Amsterdam region
With then:

Use For a Record Request

The Fill Form Below. ­

Use For A Message To Us

The Fill Form Below. ­

There are on randoms days

these will in the near future be extended

below some pictures of the last
Studio in 1987